Fibroids: Types of Fibroids and Diagnosis

"Fibroids" or "uterine myomas (short for leiomyoma)", affect 30% of women. The terms "fibroid" and "myoma" are used interchangeably. Most fibroids do not cause symptoms, and do not require treatment. 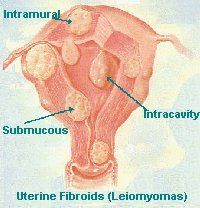 "Fibroids" or "uterine myomas (short for leiomyoma)", affect 30% of women. The terms "fibroid" and "myoma" are used interchangeably. Most fibroids do not cause symptoms, and do not require treatment.

Fibroids may require treatment in the following circumstances:

Types of Fibroids
Fibroids are classified by their location (see figure above), which effects the symptoms they may cause and how they can be treated. Fibroids that are inside the cavity of the uterus will usually cause bleeding between periods (metrorrhagia) and often cause severe cramping. Fortunately, these fibroids can usually be easily removed by a method called "hysteroscopic resection," which can be done through the cervix without the need for an incision. Submucous myomas are partially in the cavity and partially in the wall of the uterus. They too can cause heavy menstrual periods (menorrhagia), well as bleeding between periods. Some of these can also be removed by hysteroscopic resection.


Intramural myomas are in the wall of the uterus, and can range in size from microscopic to larger than a grapefruit. Many of these do not cause problems unless they become quite large. There are a number of alternatives for treating these, but often they do not need any treatment at all. Subserous myomas are on the outside wall of the uterus, and may even be connected to the uterus by a stalk (pedunculated myoma.) These do not need treatment unless they grow large, but those on a stalk can twist and cause pain. This type of fibroid is the easiest to remove by laparoscopy.


Diagnosis of Fibroids
Fibroids may be felt during a pelvic exam, but many times myomas that are causing symptoms may be missed if the examiner relies just on the examination. Also, other conditions such as adenomyosis or ovarian cysts may be mistaken for fibroids. For this reason, I routinely do an ultrasound examination at the time of the first visit when a woman has symptoms of abnormal bleeding or cramping, or if I feel an abnormality on examination. Vaginal probe ultrasound only takes a few minutes to do, is not uncomfortable, and rapidly provides invaluable information if the examiner is experienced in looking at uterine abnormalities. It is possible to fill the uterus with a liquid during the ultrasound (saline enhanced sonography or sonohysterogrami). While this will often provide additional information to the regular ultrasound, I usually learn much more by looking inside the uterus with a little telescope. This exam, called hysteroscopy, is usually a quick office procedure, that allows directly looking inside the uterus.


One of the most common conditions confused with fibroids is adenomyosis. In adenomyosis the lining of the uterus infiltrates the wall of the uterus, causing the wall to thicken and the uterus to enlarge. On ultrasound examination this will often appear as diffuse thickening of the wall, while fibroids are seen as round areas with a discrete border. Adenomyosis is usually a diffuse process, and rarely can be removed without taking out the uterus. Since fibroids can be removed or treated by uterine artery embolization, it is important to differentiate between the two conditions before planning treatment. It is also common to have some adenomyosis in addition to fibroids.

For More Information on the terms used in this article please click the links below:Hysteroscopic ResectionAdenomyosisHysteroscopyUterine Artery Embolization

Chromosomal abnormalities in infertile couples who use assisted reproductive technology (ART) do not appear to impact cumulative clinical pregnancy or live-birth rates, according to a study published in the Annals of Medicine.

Women who underwent a frozen-thawed embryo transfer (FET) for assisted reproductive technology (ART) treatment were nearly twice as likely to experience bleeding or miscarriage in the first trimester with hormone replacement cycles (HRC-FET) compared to natural cycles (NC-FET), according to a retrospective cohort study published in the European Journal of Obstetrics & Gynecology and Reproductive Biology.

The authors noted that although adenomyosis is common among infertile women, it is unclear whether the condition has a detrimental effect on in vitro fertilization and embryo transfer (IVF-ET) results.

Women with previous recurrent ectopic pregnancy (EP) have a significantly lower risk of EP following in vitro fertilization (IVF), compared to women with previous single EP, according to a retrospective cohort study published in the journal PLOS One.