Hereditary cancers in gynecology: What clinicians need to know

The contribution of hereditary cancer syndromes to many gynecologic malignancies has been increasingly recognized over the past decade. As they often serve as primary care providers, ob/gyns are uniquely positioned to help identify at-risk women before they develop cancer.

The contribution of hereditary cancer syndromes to many gynecologic malignancies has been increasingly recognized over the past decade. As they often serve as primary care providers, ob/gyns are uniquely positioned to help identify at-risk women before they develop cancer. Identification of these women is important so they may be offered increased screening or risk-reduction measures that have proven benefits for improving survival. The most common syndromes related to breast and gynecologic cancers are highlighted in Table 1. 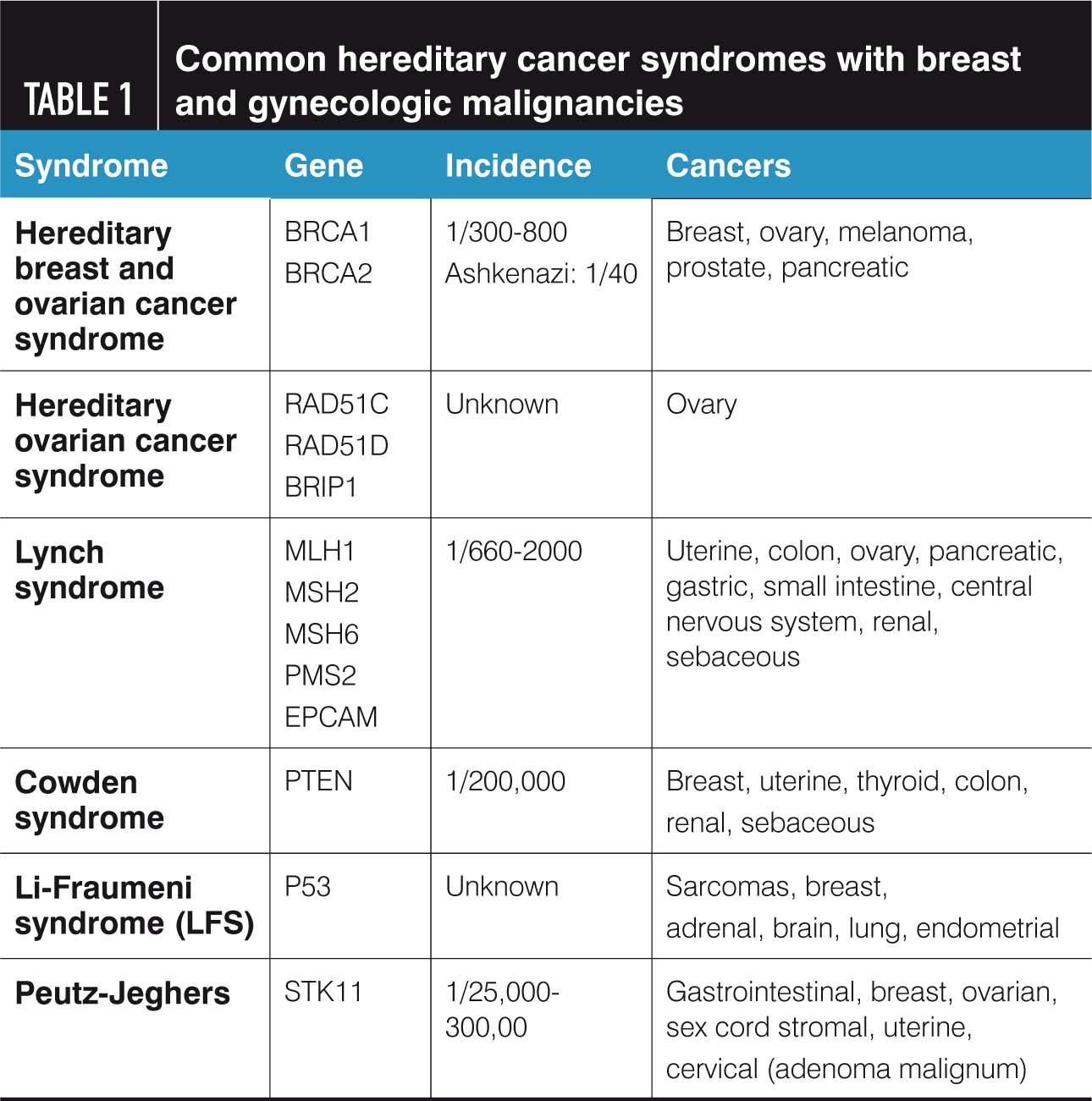 Though most cancers are sporadic, women with a known deleterious genetic mutation have significantly increased risks of developing a malignancy (Table 2). Of gynecologic cancers, ovarian cancer is most often associated with an inherited susceptibility gene, which can occur in about 20% of cases. The majority of hereditary breast and ovarian cancers are due to BRCA mutations; however, a significant portion are related to several other gene mutations (RAD51C, RAD51D, BRIP1, Lynch genes).1 In contrast, only 4% to 5% of non-hereditary breast cancers are related to BRCA1 and 2, with an even lower percentage due to other genes (PTEN, TP53, PALB-2, CDH, STK-11).2 Similarly, very few endometrial cancers are hereditary with about 3% to 5% associated with Lynch syndrome and some are even more rarely related to Cowden’s syndrome (PTEN), Li-Fraumeni (TP53), or Peutz-Jeghers (STK11).2 All of these cancer syndromes are autosomal-dominant and have implications not only for a patient, but also for her family.2

There are several features in a woman’s personal or family history that should raise suspicion for potential involvement of an underlying genetic mutation and prompt genetic counseling/testing (Table 3). Most cancer syndromes will affect multiple generations, and diagnoses will occur at an earlier age than in sporadic malignancies. Male and triple-negative breast cancers (negative for estrogen, progesterone receptors and HER2/neu amplification) are also hallmarks of hereditary cancers, as is having a relative affected by 2 primary malignancies.2 In addition, any woman who has a close relative with a known cancer-susceptibility gene mutation should be referred for testing.3

When possible, genetic testing in a family should start with a cancer-affected individual. The affected person is the most likely in the family to carry a mutation and from whom a negative result is most informative-meaning, that if full genetic testing is negative, there is no identifiable mutation as the cause of the cancer and thus no benefit to testing cancer-unaffected individuals within that same familial lineage. But if a deleterious mutation is found in the person with cancer, directed genetic testing can then be initiated in other family members to determine if they carry the gene (true positives who need further tailored screening and risk reduction measures) or they do not (true negatives who can likely go back to population cancer screening).  If the cancer-affected relative is not available, the closest relation to the affected family member is the next best option. 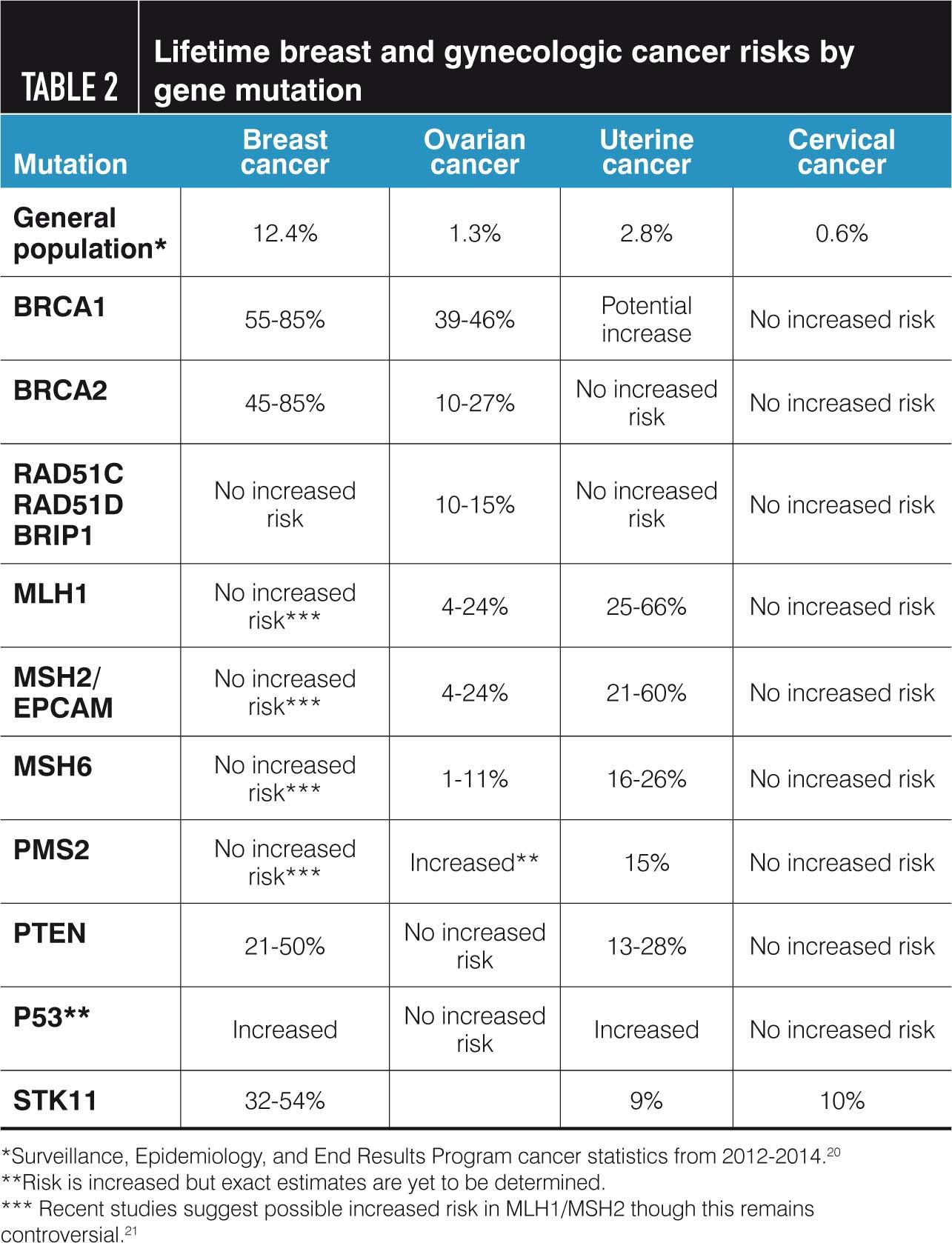 In 2014, the Society of Gynecologic Oncology recommended genetic testing for all women with epithelial ovarian cancer.4 As more women are undergoing testing and technology has evolved to make testing cheaper and faster, more and more cancer susceptibility genes are being identified. This has contributed to increasing the utilization of gene panel testing.1 While testing upwards of 20 to 50 genes may increase the likelihood of finding a deleterious mutation, it also leads to discovery of more uncertain results, such as variants of uncertain significance (VUS) or deleterious genes with moderate risk or penetrance, for which there is far less data on which to base management decisions. A VUS is a change in the gene that has not yet been associated with causing a cancer, most often because there is not yet enough information about the specific variant to determine if it is benign versus cancer-causing. Most of these mutations are reclassified as benign when more data become available over time.

Interpreting these test results has important implications. For women with known mutations in well-described cancer genes, evidence-based screening and risk reduction strategies are described below. However, care must be taken not to apply the same guidelines to women found to have a VUS, as that does not imply increased cancer risk; it is simply a variation whose significance remains unclear.5 In addition, women with a VUS or an entirely negative genetic result may remain at significantly increased cancer risk as current testing doesn’t eliminate the possibilities of increased familial cancer risk because causative mutations exist that have yet to be discovered. Management of these potentially high-risk women should be individualized with the aid of a genetic counselor or a provider with experience in hereditary cancer syndromes as they may still benefit from more intensive screening/risk reduction measures even in the face of negative genetic testing results.

The benefit of increased screening in women with hereditary cancer syndromes is best established for breast cancer. More frequent screening with mammography and the addition of breast magnetic resonance imaging (MRI) does detect earlier cancers in women at high risk of breast cancer.6 The benefit of early detection also translates into improved survival for these women.7 In contrast, screening for ovarian cancer with ultrasound and CA-125 has never been shown to improve early detection or survival.8,9 The same is true for endometrial cancer, but screening can be performed at the discretion of the physician following National Comprehensive Cancer Network (NCCN) guidelines for women who have not yet undergone risk-reducing surgery. 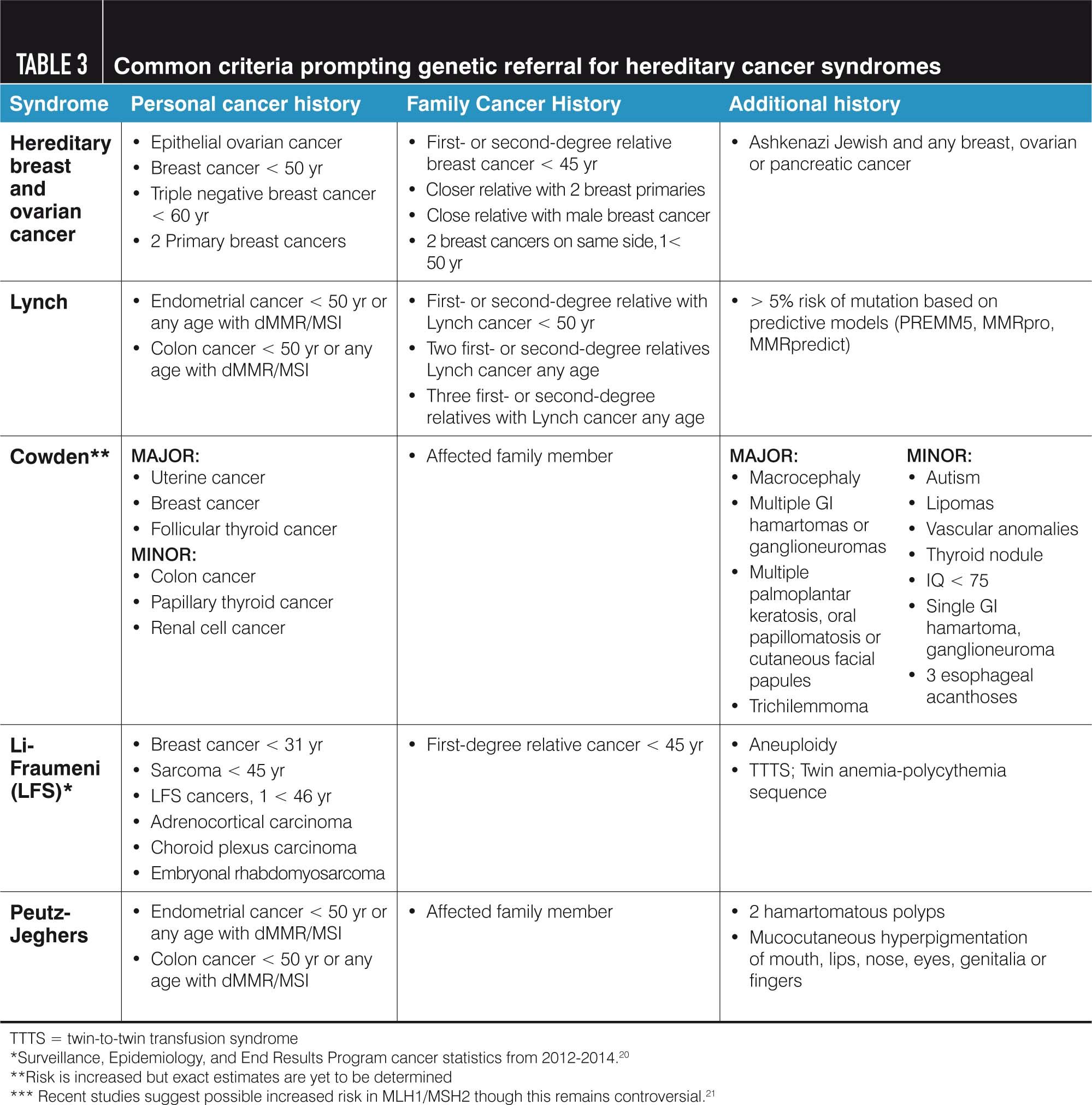 For women with a genetic predisposition to breast cancer, screening begins from age 20 to 25 typically with MRI (mammograms are omitted prior to age 30 in women with BRCA mutations), with slight variation based on the specific gene3 (Table 4). MRI is often used in younger women to reduce lifetime radiation exposure and idiopathic cancers. There are no recommendations for more intensive MRI screening after age 75, and its use should be individualized.3

Despite lack of evidence for ovarian cancer screening, in women who have not yet undergone oophorectomy and are at high-risk the NCCN recommends consideration of annual transvaginal ultrasound (TVUS) and CA-125.3 Women should be counseled regarding the extreme limitations of current ovarian cancer screening. Likewise, screening with TVUS and endometrial biopsy every 1 to 2 years can be considered for patients at high risk of uterine cancer, although data supporting this recommendation are limited and many simply recommend prompt evaluation of any irregular bleeding.3

Even before women are ready to undergo a risk-reducing surgery, there are ways they can reduce their cancer risk through the use of medications, primarily birth control pills for ovarian cancer risk reduction and selective estrogen-receptor modulators (SERMs) for breast cancer risk reduction. As long-acting reversible contraception is gaining in popularity, it is important to remember that women with a genetic predisposition to ovarian cancer should consider combined oral contraceptives (OCs). Any use of them has been shown to decrease risk of ovarian cancer in women with BRCA1 and 2 mutations by 50%, with degree of benefit increasing by duration of use.10

SERMs such as tamoxifen and raloxifene are medical options for reducing breast cancer risk for women with hereditary breast and ovarian cancer syndrome, both in the setting of reducing a contralateral breast cancer by 45% to 60% and reducing risk of a first breast cancer by 62%.13,14 Some evidence suggests the benefit may be greatest in BRCA2 carriers compared to BRCA1, as these cancers are more likely to be hormone receptor-positive.13

NEXT: "Ultimately, surgery remains the gold standard for risk reduction"

Ultimately, surgery remains the gold standard for risk reduction in these women. For women with a hereditary predisposition for breast cancer, bilateral mastectomy should be discussed. The benefit of risk-reducing mastectomy has been studied in women with hereditary breast and ovarian cancer syndrome and confers a 90% reduction in breast cancer risk.15 Extrapolating these data, there is likely a similar benefit for women with Cowden and Peutz-Jeghers syndromes. 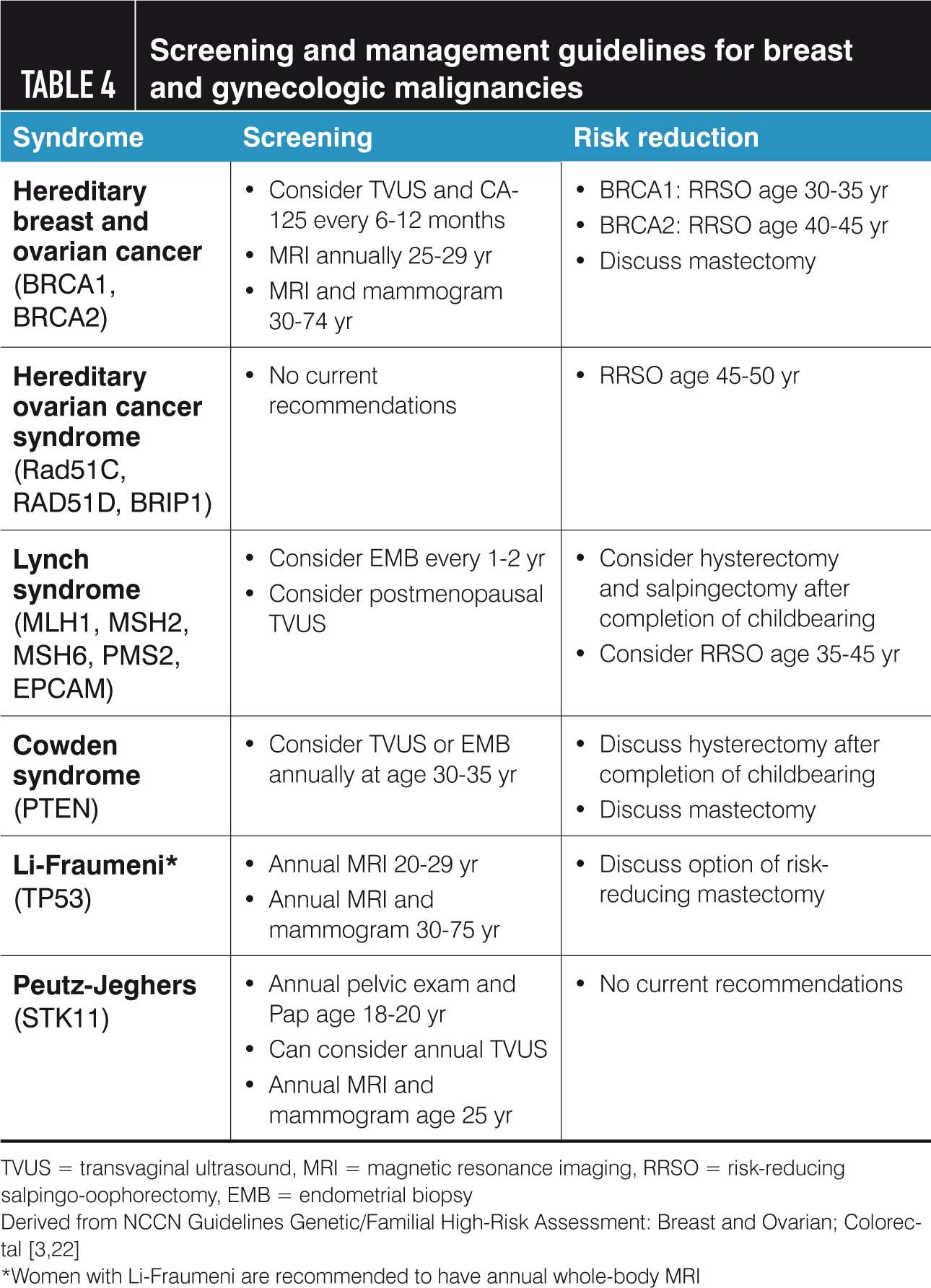 Risk-reducing salpingo-oophorectomy has broader benefits for women with hereditary breast and ovarian cancer syndrome. In addition to decreasing the risk of ovarian cancer by 70% to 85%, it has also been shown to decrease breast cancer risk by 54% and all-cause mortality by 60% to 70%.16,17 Because the average age for BRCA1 diagnosis is about 10 years earlier than for BRCA2 and even later for the hereditary ovarian cancer genes (RAD51C, RAD51D, BRIP1),2 timing of oophorectomy varies by genetic mutation (Table 4).

With the increased understanding that many high-grade serous cancers arise from the fallopian tube, salpingectomy may be an option for women seeking sterilization or those unwilling to undergo oophorectomy. But it should always be performed in the context of counseling that oophorectomy should be completed at a later time and that we have much more limited data on efficacy of salpingectomy alone in this setting.

While BRCA carriers, and presumably those with any predisposition to ovarian cancer, have a chance of developing a primary peritoneal cancer following risk-reducing oophorectomy, there are no guidelines to direct surveillance of them given limited evidence. Some providers choose to perform annual screening with CA-125, or ultrasound, or simply physical exam.

Ob/gyns provide care to millions of women and must play a vital role in identifying and managing women at risk for hereditary cancer syndromes. Knowledge in this area is rapidly evolving. Any personal or family history of breast or gynecologic malignancy should prompt further questioning and inquiry. Identification of high-risk women is vital to implement screening and both medical and surgical risk reduction measures that have the ability to save a life.