Myofibroblastic tumor (MT) is a neoplasm of unknown etiology, occurring at various sites. Literary, it is composed of spindle cells (myofibroblasts). Usually it is associated with variable inflammatory component; hence the name is inflammatory myoblastic tumor (IMT). The occurrence in the rectovaginal septum of female is almost unknown in the literature.

Background
Myofibroblastic tumor (MT) is a neoplasm of unknown etiology, occurring at various sites. Literary, it is composed of spindle cells (myofibroblasts). Usually it is associated with variable inflammatory components; hence the name is inflammatory myoblastic tumor (IMT). The occurrence in the rectovaginal septum of female is almost unknown in the literature.

Conclusion
Myofibroblastic tumors, although very rare should be considered in the differential diagnosis of masses in the posterior vaginal wall, rectovaginal septum or pouch of Douglas.

Myofibroblastic tumor is usually associated with some inflammatory cells, hence named IMT and sometimes known as inflammatory pseudotumor tumor (IPT). It is a lesion of unknown etiology that has been reported in numerous anatomic sites. The tumor is composed of a dominant spindle cell proliferation with a variable inflammatory component. These spindle cells are now known to be myofibroblasts and this is the reason for the current designation for this disease. The inflammatory factor may not be applicable to all tumors, since some investigators have demonstrated the presence of chromosomal abnormalities and documented cases showing aggressive behavior supporting the theory that at least some of these tumors are true neoplasms. The tumor is more common in children with no predilection for sex, but in adult age it is more common in women who often present with fever of unknown origin or other vague, nonspecific symptoms. Splenomegaly is a frequent finding.

The outlook of this disease has changed with time from a benign reactive process to a malignant neoplasm, based on the multiple case reports demonstrating recurrent and constant clonal genetic alterations.7-10

IMT is an indolent spindle cell proliferation that can histologically resemble various malignant mesenchymal neoplasms; however, it generally behaves as a benign or locally recurrent tumor. Most IMTs involve the lung, mesentery, omentum, or retroperitoneum.

Case
MS is a 35 year old gravida 1, Para 1 who had spontaneous vaginal delivery 6 months earlier. She presented with a vaginal mass that was painless but causing difficult intercourse. She had been interviewed by a general surgeon who found 8-10 cm mass related to the posterior vaginal wall. He had performed a laparotomy, trying to reach the mass through the pouch of Douglas and when he failed, he tried to do a biopsy which was insufficient and inconclusive. Three weeks later she reported to our department, where examination showed an 8-10 cm sized mass between the rectum and posterior vaginal wall, slightly shifted to the right side of the midline. The mass was not cystic but firm, mobile and not tender and extending from 2 cm above the introitus, up to the level of posterior vaginal fornix. Rectal examination showed that the mass was in front of the rectum and upper part of the anal canal. A CT (Fig 1) and a directed biopsy (Fig 2), was carried out.  It showed a 8-10 cm mass abutting the rectum but not infiltrating; the biopsy showed fibroid nature. Apart from that the patient gave no history of anything important and the examinations of all other systems were negative. She denied fever, her postpartum course had been uncomplicated and she was exclusively breast feeding since delivery. Laboratory data were unremarkable. 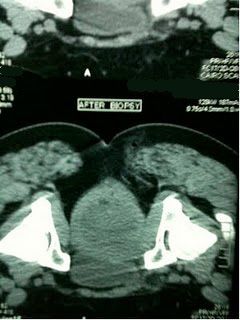 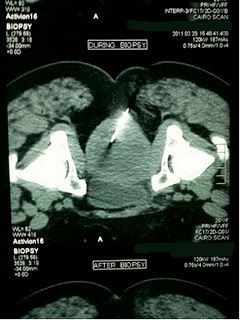 Fig 3-4 Dissection of the Tumor 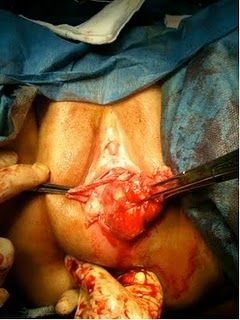 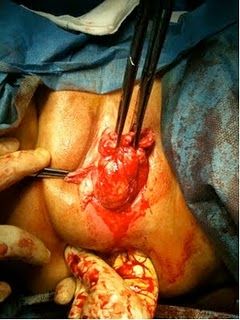 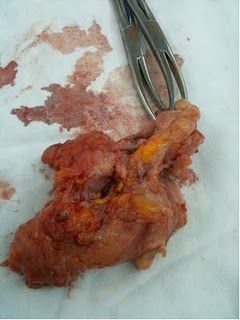 The patient had an uncomplicated recovery and was discharged home. The pathology report came back with a diagnosis of IMT, benign in nature.

Discussion
IMT is a relatively rare neoplasm. It was previously referred to as plasma cell granuloma, or inflammatory pseudo tumor (IPT). It has long been debated regarding the origin of IMT whether it was truly neoplastic or a post inflammatory process. The proposed etiologies included Epstein Barr virus (EBV), Human herpes virus (HHV8), and over expression of interleukin IL-6. Though other diseases like Kaposi's sarcoma and Castleman's diseases also have similar etiologies, molecular transcription form of open reading frame (ORF) -16, K13, 72 expressed in IMT are not expressed in the aforesaid diseases.11 Recently IMT is considered a neoplasm rather than a post-inflammatory process because of cytogenetic clonality, recurrent involvement of chromosomal region, occasional aggressive local behavior and metastasis of the tumor.1  With a differential diagnosis of a mass in the rectovaginal septum, one should always consider endometriosis nodule, tuberculosis or metastases, as it is mentioned an all the teaching text books. Of course that triad was considered, and was ruled out in our case by tumor markers, ultrasound, CT directed biopsy, and the past medical history. The mobility of the mass and rectal examination almost excluded a malignant cause of either rectal or metastatic origin. Endometriosis should have been diagnosed by the associated clinical picture of endometriosis in addition to rectal complaints like tenenesums and maybe constipation.

Excision was the definitive treatment; however, the route of the excision was a matter of debate. The general surgeon when asked preferred the abdominal exploration but since gynecologists know that anatomical area more than any other specialty physician, the vaginal route was opted.

Conclusion
IMT is a rare neoplasm of uncertain biological potential. Complete surgical resection remains the mainstay of the treatment. IMT although rare, should be considered as a diagnosis.

Take a look at our most popular gynecology articles from 2022.

At the 2022 AAP National Conference & Exhibition, a professor from the Baylor College of Medicine discusses how to develop an approach to investigate menstrual disturbances for adolescent patients and understand treatment options.