Uterine fibroid embolization represents a fundamentally new approach to the treatment of fibroids. Embolization is a minimally invasive means of blocking the arteries that supply blood to the fibroids. It is a procedure that uses angiographic techniques (similar to those used in heart catheterization) to place a catheter into the uterine arteries. Small particles are injected into the arteries, which results in the blockage of the arteries feeding the fibroids. This technique is essentially the same as that used to control bleeding that occurs after birth or pelvic fracture, or bleeding caused by malignant tumors.

Uterine fibroid embolization represents a fundamentally new approach to the treatment of fibroids. Embolization is a minimally invasive means of blocking the arteries that supply blood to the fibroids. It is a procedure that uses angiographic techniques (similar to those used in heart catheterization) to place a catheter into the uterine arteries. Small particles are injected into the arteries, which results in the blockage of the arteries feeding the fibroids. This technique is essentially the same as that used to control bleeding that occurs after birth or pelvic fracture, or bleeding caused by malignant tumors. The procedure was first used in fibroid patients in France as a means of decreasing the blood loss that occurs during myomectomy. It was discovered that after the embolization, while awaiting surgery, many patient's symptoms went away and surgery was no longer needed. The blockage of the blood supply caused degeneration of the fibroids and this resulted in resolution of their symptoms. This has led to the use of this technique as a stand-alone treatment for symptomatic fibroids.

The procedure is usually done in the hospital with an overnight stay after the procedure. The patient is sedated 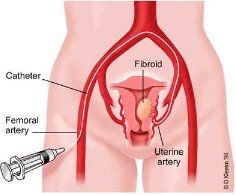 and very sleepy during the procedure. The uterine arteries are most easily accessed from the femoral artery, which is at the crease at the top of the leg as shown in the figure. Initially, a needle is used to enter the artery to provide access for the catheter. Local anesthesia is used, so the needle puncture is not painful. The catheter is advanced over the branch of the aorta and into the uterine artery on the side opposite the puncture. A second arterial catheter is then placed from the opposite femoral artery to the other uterine artery. Before the embolization is started, an arteriogram (x-ray) is performed to provide a road map of the blood supply to the uterus and fibroids. 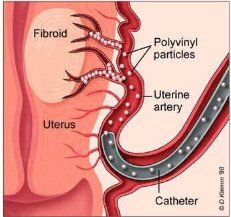 After the arteriogram, particles of polyvinyl alcohol (PVA) are injected slowly with X-ray guidance. These particles are about the size as grains of sand. Because fibroids are very vascular, the particles flow to the fibroids first. The particles wedge in the vessels and cannot travel to any other parts of the body. Over several minutes the arteries are slowly blocked. The embolization is continued until there is nearly complete blockage of flow in the vessel. Once one side is completed, the other side is embolized. After the embolization, another arteriogram is performed to confirm the completion of the procedure. Arterial flow will still be present to some extent to the normal portions of the uterus, but flow to the fibroids is blocked. The procedure takes approximately 1 to 1 1/2 hours.

Most patients will experience several hours of moderate to severe pain after the procedure. There may also be nausea, and possibly fever. The pain and nausea is controlled with intravenous medications, usually with a pump that allows self-administration of the medications. After an initial period of bed rest for six to eight hours, those patients with mild to moderate symptoms may be discharged. Most patients are hospitalized overnight. Most symptoms are substantially improved by the next morning allowing discharge from the hospital.

Long-term complications are not expected, although several questions about potential side effects remain. X-rays are used to guide the procedure and this raises a concern about potential long-term effects. In a study measuring the X-ray exposure during uterine embolization, the exposure was found to be below the level that would be expected to cause any health effect to the patient herself or to future children.

Another unresolved question is the effect, if any, of this procedure on the menstrual cycle. The overwhelming majority of women who have had embolization of fibroids have had decreased bleeding with normal menstrual cycles. There have been a few women (most of whom are near the age when menopause would be expected) who have lost their menstrual periods after uterine embolization. It is uncertain whether these cases are a result of decreased ovarian function from the procedure. This question will require further study. Based on this limited information, it appears that this procedure may result in loss of menstrual cycles (premature menopause) in a very small number of patients.

As of this time, approximately 2000 to 3000 patients have had this procedure world-wide. Initial results suggest that symptoms will be improve in 90% of patients with the large majority of patients markedly improved. Most patients have rated this procedure as very tolerable. The expected average reduction in the volume of the fibroids is 50% in three months, with reduction in the overall uterine volume of about 35%. The long-term outcome is not known, in that the arteries could reopen or collateral vessels could be recruited which might allow regrowth of the fibroids. As of yet this has not been reported in the published series but only short term follow-up is available. Therefore, it is not yet known if the fibroids can regrow.

This section was written to provide patients with an overview of uterine fibroid embolization. If you are interested in a more detailed discussion of the reported results, we encourage you to read our references.

If you would like to consider this procedure at the Fibroid Medical Center of Northern California, please feel free to contact us.

If you or your gynecologist are interested in information on this procedure, we invite them to review our Physician's Resource. They may also call us; we would be happy to discuss this procedure with them.

Acknowledgement: We wish to thank Dr. James B. Spies for permission to reproduce material from the Georgetown University web site.

Editor's Note: Because of deaths and other major complications of uterine artery embolisation in the UK it is only given a category C rating (must only be done in a randomised controlled trial) by SERNIP, UK regulating body.

In a recent study, an association was found between vaginal metabolites and spontaneous preterm birth.