The VizAblate System: Radiofrequency Ablation for the Treatment of Symptomatic Uterine Fibroids

The VizAblate System is a device that is inserted through the cervix into the endometrial cavity, and uses radiofrequency energy to ablate individual fibroids while seeing what he or she is doing with intrauterine sonography.

Hope Waltman: “How long has the VizAblate System been around?”

David Toub, MD: “By way of background, the VizAblate System is a device that is inserted through the cervix into the endometrial cavity, and uses radiofrequency energy to ablate individual fibroids while seeing what he or she is doing with intrauterine sonography. The VizAblate System was developed via a process that began in 2005, with the founding of Gynesonics as a company. Development of the current version started almost four years ago, and we received CE Mark clearance in Europe last year. ”

Hope Waltman: “How are the uterine fibroids treated?”

David Toub, MD: “The use of radiofrequency energy to treat fibroids is well established in the literature; some of us were doing this in a very different fashion back in the early 1990’s, either through laparoscopy or laparotomy, and without the benefit of being able to see what we were doing inside the fibroid itself. There are several things that are novel about VizAblate.

First, it enables fibroids to be treated transcervically, without incisions and without a requirement for general anesthesia. Several types of anesthesia, including conscious sedation and perhaps even oral medication combined with paracervical blockade, can be used. Second, we decided not to design the system so that the gynecologist would have to manipulate the treatment device along with a separate ultrasound probe in order to see what he or she is doing, as that can be challenging. Rather, we combined radiofrequency ablation, for treatment, with intrauterine sonography, for real-time imaging. The treating physician visualizes the myometrium, serosa and any fibroids using the intrauterine ultrasound probe, enabling him or her to accurately target the fibroid and ablate most or all of it. In addition, we have a very helpful and innovative graphical interface on our system. The VizAblate system includes all the usual ultrasound features, including the ability to perform transvaginal sonography. The VizAblate treatment planning software shows the operator exactly what will be ablated, and also the extent of any heating as a graphical overlay on the live ultrasound image. By keeping these regions within the uterine serosa, we avoid heating the serosa and any tissues outside the uterus. We also can make ablations of various sizes, up to a 4 x 5 cm ablation, and all the gynecologist has to do is graphically manipulate the size and location of the ablation. So the physician has a lot of flexibility with creating ablations within fibroids of different sizes, and can plan the treatment before any needle electrodes are deployed into a fibroid. The treatment duration is relatively short (4-9 minutes per ablation, depending on the size of the fibroids to be treated).”

Hope Waltman: “How does VizAblate differ from using hysteroscopy to resect fibroids?”

David Toub, MD: “VizAblate is not a hysteroscopic procedure. It is not endoscopy; the visualization is done with intrauterine sonography. What that means is that we can see beyond the endometrial cavity, and in addition to ablating submucous fibroids, we can safely treat fibroids with radiofrequency energy that are not typically amenable to a hysteroscopic approach, such as intramural and transmural fibroids. Besides being able to treat a wider range and size of fibroids than with operative hysteroscopy, we do not create chip fragments that obscure visualization, nor are we significantly distending the endometrium and risking fluid overload and complications such as hyponatremia, pulmonary and/or cerebral edema. Only a small amount of fluid is instilled to allow the intrauterine ultrasound probe to sufficiently contact tissue for visualization.”

Hope Waltman: “Are you in the process of conducting VizAblate clinical trials?”

David Toub, MD: “Currently we have a clinical trial underway, called the FAST-EU study, in the Netherlands, United Kingdom, and Mexico. One of our investigators, Dr. Hans Brlmann from Vrije Universiteit Medisch Centrum will be presenting some early data from our ongoing study, and we are very encouraged by the results. You can find out more about VizAblate at www.gynesonics.com, as well as our study page on clinicaltrials.gov, http://clinicaltrials.gov/ct2/show/NCT01226290.”

David Toub, MD, MBA, FACOG, is Medical Director of Gynesonics, which has developed the VizAblate System.

Fig. 1 The VizAblate System.
This shows the laptop-based ultrasound system, the Treatment Device and the RF Generator. 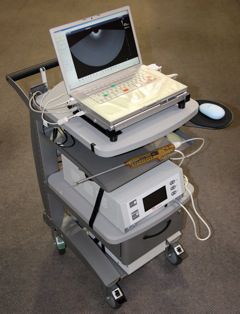 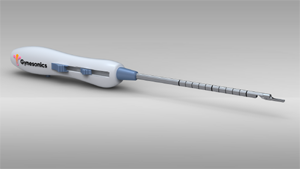 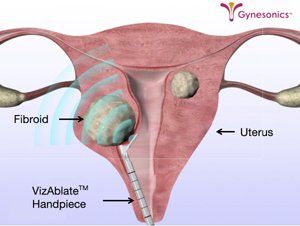