Accurate diagnosis of congenital anomalies in the first trimester and early second trimester through the use of the transvaginal scan has been variously reported in the literature since the early 1990s1-13,16-18. The feasibility of screening programmes for congenital abnormalities in the first trimester has also been recently reviewed by Chitty and Pandya8. In our day to day practice the practical importance of using the vaginal probe in the late first and particularly the second trimester is often overlooked. After about the 10th week, we tend to rest our findings on the transabdominal scan having satisfied ourself with a good crown-rump length and the thought that the pregnant woman should not at that time be unnecessarily inconvenient by the insertion of a vaginal probe. As some abnormalities may not become apparent at this time, there is justification for deferring further anatomical assessment to a slightly later date. In the second trimester, particularly after the 16th week, we have the inclination to think that the transabdominal scan is detailed enough to tell whether a fetus is normal or not and putting in a vaginal probe would appear 'odd' and unjustified. At the same time ultrasound physics would have suggested that the high frequency/low penetration ability of the vaginal transducer must be counter-productive to the visualization of normal and abnormal anatomy in these bigger fetuses. This presentation depicts in brief 4 cases which demonstrate the usefulness of the vaginal scan in the late first and early second trimester. 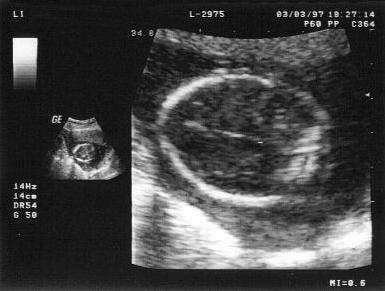 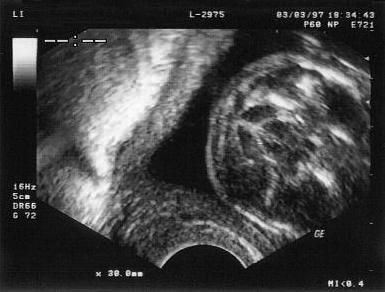 Same case: Transvaginal scan revealed detailed intracranial anatomy and the typical "banana sign"14. The Cisterna Magna was obliterated. Re-assessment of the fetal spine suggested a small open lumbar spina bifida. This was confirmed at amnio AFP and repeat scan one week later. The pregnancy was terminated. 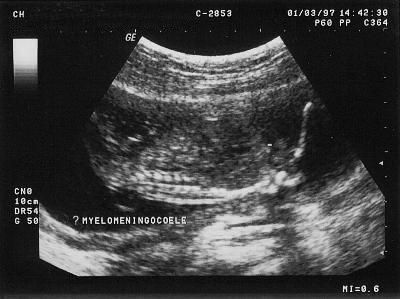 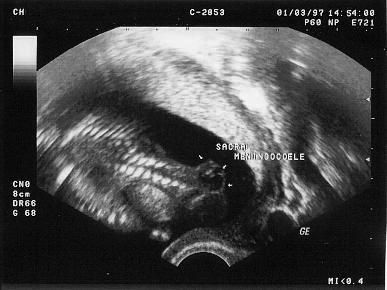 Same case: Transvaginal scan clearly demonstrated an unequivocal sacral myelomeningocele. The site of the pathology was situated just above the maternal cervical os. The pregnancy was subsequently terminated. 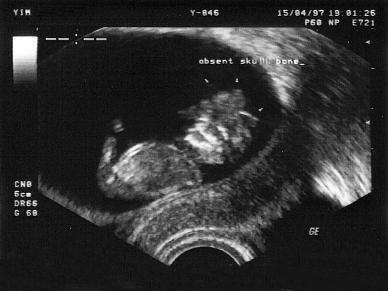 Case 3: 'Non-targeted' examination. Transvaginal scan at 11w1d showing an anencephalic fetus. The pathology was almost missed on abdominal scan due to the rather intact and sizable brain tissue. The scan was intended for dating because of irregular menstrual cycles. The crown-rump length was above the 5th centile for gestation. 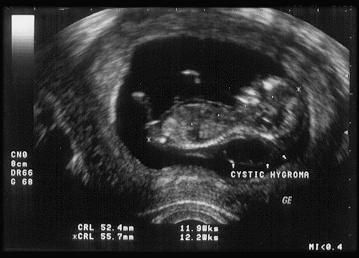 Case 4: 'Non-targeted' examination. Transvaginal scan at 12w4d demonstrating a clear septated cystic hygroma, indicating poorer prognosis 4,10, mild subcutaneous edema and posterior fossa echolucency. These were not obvious on abdominal scan as the head and the back of the fetus was lodged in the lower segment just next to the cervix. The fetal karyotype was found to be 45XO.

The feasibility of diagnosing fetal congenital anomalies using transvaginal scans in the late first and early second trimester is well known1-13,16-18. Rottem and Bronshtein in one of their earlier publications in 1990 had delineated the earliest gestational age at which various congenital malformations might be diagnosed16. There are also other reports which confirmed the superiority of the transvaginal route over the transabdominal route1,2,9 and enhanced detection of congenital anomalies when a combined approach is adopted1,10. This presentation does not attempt to discuss in detail such feasibility ( also read OBGYN.net March forum on transvaginal vs transabdominal ultrasound) or whether first trimester transvaginal sonography should replace mid-trimester transabdominal screening in such areas as nuchal fold thickness, but rather to bring to the reader's attention that the usefulness of the vaginal probe must not be forgotten when scanning a pregnancy in the late first trimester and up to even 20 weeks in the second trimester. This is particularly relevant in situations where maternal obesity and second trimester oligohydramnios are present or when the part of interest is tugged down in the lower segment above the internal cervical os. The 11th to 14th weeks period is notoriously difficult for looking at any fetal abnormality on an abdominal scan (especially the fetal head); the vaginal route on the other hand is often unexpectedly rewarding at these gestations. Patient's acceptability of transvaginal scans has also been recently investigated by Braithwaite et al3.

Case 1 was interesting in that the transvaginal scan was able to reveal a pathology which otherwise would have been missed on the abdominal scan. Case 2 illustrated the usefulness of the vaginal scan in elucidating with greater clarity a particular pathology which is already evident on abdominal scan. The third case depicted an anencephalic fetus which could have been missed on abdominal scan. As the cerebral hemispheres may remain relatively intact in the anencephalic fetus in the first trimester, the acrania may go undetected particularly in the presence of a normal crown-rump length13. The last case further demonstrated the vaginal scan's usefulness in determining the nature and prognosis of a pathology4,10 in question.
In the second trimester, one must not forget that the transvaginal scan is also useful in the assessment of cervical incompetence, threatened preterm labor (2) and placenta previa17. It's use has also been described in the study of detailed fetal intracranial anatomy in the second and third trimester19.
It should be remembered nevertheless, that transvaginal views may often be limited and assessment by the transvaginal route alone can be completely inadequate if the fetus is lying in an 'unfavorable' position20. This situation could be improved, as advocated by Reichler et al., through the application of fundal pressure to the abdomen during the scan15.

This episode of Pap Talk by Contemporary OB/GYN features an interview with Dr. Kristina Adams-Waldorf, Professor in the Department of Obstetrics and Gynecology and Adjunct Professor in Global Health at the University of Washington (UW) School of Medicine in Seattle.

In a recent study, an association was found between vaginal metabolites and spontaneous preterm birth.

This episode of Pap Talk by Contemporary OB/GYN features an interview with Dr. Emily S. Miller, with Northwestern Medicine in Chicago.

An advisory panel for the US Food and Drug Administration voted 14-1 to withdraw 17α-hydroxyprogesterone caproate (Makena; Covis Pharma) from the market.