Pregnancy is risky for women with sickle cell disease. This overview examines concerns for the mother and fetus to help you manage the risks. 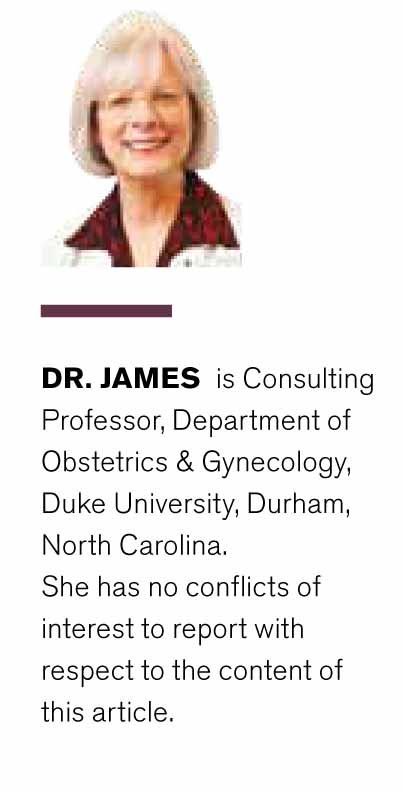 Although SCD is associated with major morbidity, more than 90% of children with SCD in the United States survive into adulthood. Compared to the general population, however, their lifespans are 2 or 3 decades shorter and limited by both acute and chronic morbidity.

By the time they reach childbearing age, young women with SCD may have suffered many severe complications. Clinically apparent stroke occurs in 11% of those with SCD by age 20 and in 24% by age 45.2 Although the condition is not usually regarded as a thrombophilia, 25% of adults with SCD have experienced venous thromboembolism (VTE) by a median age of 30, which is comparable to the rate in adults with high-risk thrombophilias.3

The only established disease-modifying therapies are chronic transfusion and hydroxyurea. The latter is strongly recommended for adults with 3 or more severe vaso-occlusive crises per year, pain or chronic anemia interfering with daily activities, or severe or recurrent episodes of acute chest syndrome. Hydroxyurea therapy is also suggested for adolescents without regard to symptoms.

Long-term transfusion therapy is used to prevent stroke in children with abnormal transcranial Doppler velocity. Potential consequences of long-term transfusion therapy are alloimmunization and iron overload. Because transfused blood contains iron that circumvents the normal pathways of iron regulation, excess iron can accumulate in tissues and can become pathological. Chelation therapy can be used to remove excess iron in patients with evidence of iron overload.1

During pregnancy, SCD poses problems to both mother and fetus. Maternal problems can arise from chronic underlying organ dysfunction such as renal disease or pulmonary hypertension, from acute complications of SCD such as vaso-occlusive crises and acute chest syndrome, and from pregnancy-related complications.

Women with SCD not only require transfusion, but also have frequently been transfused previously and, according to published reports, 20% to 50% of SCD patients are alloimmunized.8 Limited blood products are available to women who are alloimmunized and need transfusion, but the most serious consequence is the maternal risk of developing a delayed hemolytic transfusion reaction, which can be life-threatening.

Another potentially life-threatening problem is pulmonary hypertension. It affects 6%–11% of SCD patients9 and is especially morbid in pregnancy due to the increased cardiopulmonary demands of gestation. Although maternal mortality from pulmonary hypertension was previously reported to be 30%–50%, mortality remains in the range of 16%.10

In the United States, the maternal mortality rate is approximately 10 times higher than it is for women without SCD.11,13 Similarly increased rates are seen in other countries.

Fetal concerns for women with SCD include the consequences of utero-placental insufficiency, alloimmunization, and opioid exposure. Studies from multiple cohorts, including large population studies, have documented the increased risk of fetal growth restriction, preterm delivery, and stillbirth.5,11-21 Fetal growth appears to start normally, then lag after 25 weeks’ gestation.18 When fetal growth restriction occurs, it has been described as asymmetric.22

Women with SCD who have formed antibodies to fetal RBC antigens that are associated with hemolytic disease in the fetus or newborn and who are alloimmunized are at risk of having an anemic fetus or a stillbirth.23 Although there are no data specifically for infants born to mothers with SCD, in a retrospective cohort study of infants born at Mayo Clinic between 1998 and 2009, neonatal withdrawal syndrome occurred in 5.6% of infants exposed to chronic narcotic use in utero.24

Couples contemplating pregnancy should be aware of the increased risks to a woman’s health of SCD during pregnancy.

Prior to pregnancy, the physician should assess a woman’s overall health and her potential risks during pregnancy. She and her partner should be counseled accordingly. Some studies have found poorer outcomes in women with sickle cell anemia as opposed to other SCD genotypes, but other studies have found no differences.

It is the experience of the author and her colleagues that a history of frequent hospitalizations and/or episodes of acute chest syndrome correlates with poorer overall health and increased risks during pregnancy. An assessment of urine protein and a retinal examination should be performed.1 Hypertension should be treated to lower systolic blood pressure to ≤140 mmHg and diastolic blood pressure to ≤90 mmHg.1

All patients with SCD should receive immunizations according to the Advisory Committee on Immunization Practices, but with particular attention to the immunizations recommended for people who have functional asplenia. These include pneumococcal, haemophilus influenza type b, and meningococcal vaccinations.

A ferritin level should be checked before prescribing any iron. (A serum ferritin level >1000 ng/mL is suggestive of iron overload.) The American College of Obstetricians and Gynecologists recommends 4 mg of folate per day during pregnancy.25

Women with SCD who have been transfused should be tested for RBC alloantibodies. If a woman has RBC alloantibodies and the antibodies are known to cause hemolytic disease in the fetus or newborn, her partner should also be tested for the corresponding RBC antigen(s). If the partner tests positive, the couple should be counseled about the risks of hemolytic disease, how it is monitored, and how it is treated.

Couples should also be counseled about the potential fetal and neonatal effects of maternal medications, including chronic opioids. Angiotensin-converting enzyme (ACE) inhibitors, which are used to treat microalbuminuria in adults with SCD, should be discontinued.

Women with SCD are at risk of having a child affected with SCD if their partners have SCD, HbS, ï¢-thalassemia trait, or are carriers of another abnormal hemoglobin such as HbC. Women with SCD whose partners’ sickle cell or thalassemia status is unknown should be referred for hemoglobin electrophoresis.

Women whose partners carry one of the traits listed above can avoid an affected pregnancy by undergoing preimplantation genetic diagnosis. Alternatively, after spontaneous conception, prenatal diagnosis of SCD is possible by chorionic villus sampling in the first trimester or by amniocentesis in the second trimester. Couples who are at risk of having a child affected with SCD should be referred for genetic counseling.

Issues not addressed before conception should be addressed early in pregnancy. An assessment of iron stores is usually made with the initial complete blood count (CBC). Most patients with SCD have elevated serum ferritin levels and should not receive additional iron supplementation, but should continue to receive folic acid. Hydroxyurea therapy, chelating agents, and ACE inhibitors should be discontinued, although only ACE inhibitors have been associated with congenital anomalies.

Women with SCD are at high risk of preeclampsia and both arterial thromboembolism and VTE. Therefore, it is reasonable to initiate low-dose aspirin after the first trimester.28 Women with a history of VTE should receive anticoagulation with low-molecular-weight heparin (LMWH) during pregnancy and the postpartum period.

Care during pregnancy includes maternal and fetal surveillance. Monthly CBCs are typically performed to monitor for severe anemia. In the only randomized controlled trial published to date, prophylactic transfusion was associated with a decreased risk of pain crises and severe anemia, but no difference was observed in pregnancy outcomes.29

Other therapies that have shown promise in reducing vaso-occlusive crises and would potentially be safe in pregnancy (such as propranolol and LMWH) have not been confirmed in multicenter trials and have not been studied in pregnancy.30

Risks of adverse fetal outcomes are reduced, but not eliminated, with fetal surveillance, which may lead to planned early delivery. Fetal surveillance should include, at a minimum, serial ultrasonography for fetal growth every 3–4 weeks starting in the third trimester with initiation of antepartum fetal testing at 32 weeks’ gestation or sooner if indicated.

A contributing factor to the increased incidence of stillbirth is utero-placental insufficiency, but sudden and unpredictable stillbirths do occur. Some experts recommend induction of labor after 37 weeks’ gestation.5 Plans for the mode of delivery should be according to obstetric indications while recognizing that the rate of cesarean delivery is higher in women with SCD.5,11,12,15,20 An anesthesiologist should be consulted in the third trimester or during any hospitalization.

Although prophylactic transfusion was not shown to improve pregnancy outcomes in patients with SCD, preoperative transfusion therapy to increase hemoglobin levels to 10 g/dL is strongly recommended in patients with sickle cell anemia (HbSS and HbSï¢0-thal), and should be considered in patients with other genotypes.1 When a transfusion is clinically indicated in the patient with SCD, the objective is to lower the percentage of HbS to approximately 40% while simultaneously raising the total hemoglobin concentration to about 10 g/dL.25

Since the need for cesarean delivery cannot be predicted, and women with SCD are at high risk of cesarean delivery, it may be reasonable to aim for this total hemoglobin concentration in the last month of pregnancy.

Women with SCD have a risk of thrombosis comparable to that in patients with high-risk thrombophilia. Women with SCD should have pneumatic compression devices during antepartum hospitalizations, during labor, and at the time of cesarean delivery. For women who are not already receiving anticoagulation for a history of VTE, some consideration should be given to prophylactic or low-dose anticoagulation during pregnancy and for 6 weeks postpartum.

The rare pregnant patient with SCD who has undergone stem-cell transplantation (see sidebar) should be evaluated and managed as are other women with SCD. This patient may be at reduced risk of vaso-occlusive crises, but will likely have been selected for transplantation due to some chronic organ damage and may have suffered additional tissue damage from bone marrow-suppressive chemotherapy. Regimens typically include busulfan, which should prompt an evaluation of pulmonary function.31

There are no randomized trials on the safety and efficacy of interventions (transfusion, oxygen therapy, fluid replacement analgesia, and/or steroids) for treating pain crises during pregnancy.32

A pregnant woman with SCD who presents with pain should be evaluated for other complications, and pain should be treated promptly and aggressively.1 Nonsteroidal drugs are contraindicated, so opioids should be used. Many women with SCD have a high tolerance for opioids, but they still need adequate and appropriate medication to control pain during vaso-occlusive crises in pregnancy. Opioids should not be withheld due to concerns for addiction.

Transfusion should be administered only if there are other indications.1 Oxygen should be given if saturation is less than 95% by pulse oximetry.1,25 Incentive spirometry should be initiated for patients who are hospitalized for a vaso-occlusive crisis.1

During pregnancy, SCD poses problems to both mother and fetus. Maternal problems can arise from chronic underlying organ dysfunction such as renal disease or pulmonary hypertension, from acute complications of SCD such as vaso-occlusive crises and acute chest syndrome, and/or from pregnancy-related complications.

Couples should be counseled that a pregnancy with SCD is high risk for both fetus and mother and be made aware of the increased risks of adverse pregnancy outcome. Risks of adverse fetal outcomes are reduced but not eliminated with fetal surveillance.

15. Howard RJ, Tuck SM, Pearson TC. Pregnancy in sickle cell disease in the UK: results of a multicentre survey of the effect of prophylactic blood transfusion on maternal and fetal outcome. BJOG. 1995;102:947–951.