Endometrium refers to the tissue lining the uterus. The primary function of the endometrium is to participate in the implantation of the fertilized ovum and the subsequent formation of the maternal portion of placenta.

Endometrium
Endometrium refers to the tissue lining the uterus. The primary function of the endometrium is to participate in the implantation of the fertilized ovum and the subsequent formation of the maternal portion of placenta.

The endometrium undergoes cyclical changes in accordance with the menstrual cycle. The follicular/proliferative phase lasts from the end of menses until ovulation and defines a period when the endometrium increases in thickness. The following secretory/luteal phase sees the endometrial glands become active and secreting a carbon-rich substance  to prepare for the fertilized ovum. Ultimately, if there is no fertilization of ovum, the menstrual phase begins where the glands stop secretion and there is shedding of the superficial endometrial layers accompanied by bleeding.

These changes are under hormonal control.  The endometrium is sensitive to estrogen and progesterone. Estrogen influences endometrial proliferation and progesterone induces the appearance of  glycogen-secreting glands.

Endometriosis
Endometriosis is a condition commonly found in women of reproductive age involving ectopic (outside the uterus) endometrial tissue. In most cases the ectopic tissue is found in the pelvis. Rarely it can also be found in more distant parts of the body. The ectopic endometrium in itself is usually benign. However, the endometrial tissue remains responsive to the physiologic fluctuations in hormones, such as estrogen and progesterone. It is the proliferative, secretory and inflammatory characteristics induced by these hormones in the ectopic endometrium that are thought to cause the two main symptoms of endometriosis: pain and infertility. 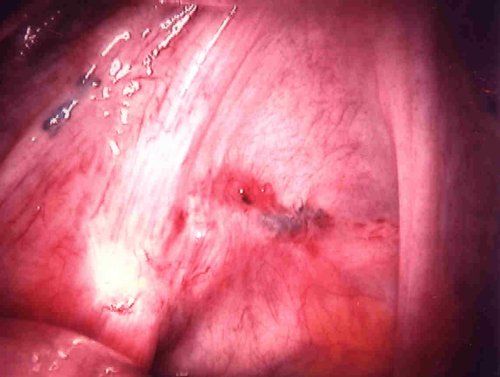 The most important one, best supported by circumstantial evidence, is the theory of retrograde menstruation. Evidence suggests that, during menses, there is retrograde flow of endometrial tissue through the fallopian tubes and into the abdominal cavity. Thus, the ectopic endometrium becomes transplanted in the abdominal cavity. It can also be disseminated via vascular or lymphatic channels to other locations. However, the prevalence of women with retrograde menstruation is much higher than the prevalence of women with endometriosis. Therefore, other factors, such as the amount of tissue flowing in a retrograde manner, may further determine susceptibility to the disease.

Other theories proposed to explain endometriosis, some in conjunction with the retrograde flow theory, include metaplastic transformation of peritoneal lining, changes in cell-mediated immunity allowing ectopic endometrial tissue to proliferate and altered humoral immunity with auto antibodies to endometrium.

Endometriosis is a heterogeneous disease that ranges in severity from minimal to severe. Therefore, clinical staging is of utmost importance for planning therapy, determining prognosis and communicating with other physicians. In the 1970s descriptive clinical staging systems were proposed. These systems have generally been replaced by the revised American Fertility Society (AFS) staging system, which was most recently updated in 1996.

In the AFS system, points are assigned for the severity of endometriosis based on the size and depth of the implant and for the severity of adhesions. Points are summed, and patients are assigned to one of four stages: stage I--minimal disease, 1 to 5 points; stage II--mild disease, 6 to 15 points; stage III--moderate disease, 16 to 40 points; and stage IV--severe disease, more than 40 points. Although the new classification scheme does not alter the staging of the disease, it does allow for the inclusion of atypical lesions in the point system.

Endometriosis can also be subdivided into three broad categories according to location and type of lesions: peritoneal endometriosis, ovarian endometrial cysts and deep nodular endometriosis.

1. Peritoneal Endometriosis: Early peritoneal lesions are highly vascularized implants and bleed at menstruation. These are active lesions in which chronic recurrent bleeding and inflammation ultimately lead to fibrosis and healing. Thus, the red lesions evolve to black typical lesions and subsequently to white lesions with poor vascularization and some glandular debris.

2. Ovarian Endometrial Cysts (Endometrioma): Ovarian endometrioma are thought to be formed by invagination of the ovarian cortex after the accumulation of menstrual debris from bleeding of endometriotic implants. Endometrioma can be large (>3cm) and multilocular, and can appear like "chocolate cysts" due to the large amount of blood and debris they contain.

3. Deep Nodular Endometriosis: In this type of endometriosis, ectopic tissue infiltrates into the rectovaginal septum or fibromuscular pelvic structures such as the uterosacral and utero-ovarian ligaments. Nodules are formed by the hyperplasia of smooth muscle and fibrous tissue surrounding the infiltrated tissue. As the endometriotic tissue is enclosed in nodules, and is not a free implant, there is no cyclical bleeding associated with deep nodular endometriosis. 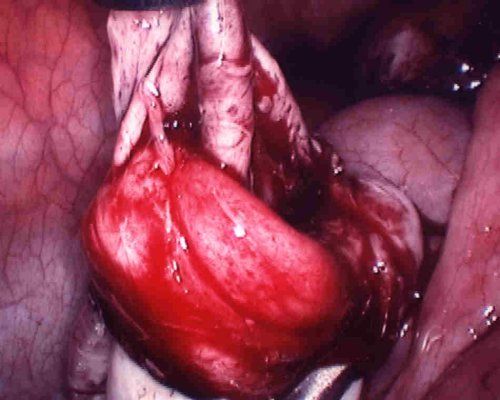 Prevalence
Endometriosis is one of the most common disorders in women with peak incidence in the third and fourth decades of life. Although the disease can be seen at any time in women of reproductive age, the onset of the condition usually coincides with the onset of menarche. It is believed that approximately 3-10% of women of reproductive age have endometriosis. The reported incidence of endometriosis among infertile women is 20-50% and among women with pelvic pain, 39-59%. Unfortunately, the accuracy of prevalence estimates is limited since there are no reliable markers available for endometriosis.

Risk Factors
Possible risk factors include many years of spontaneous menstrual cycles, longer duration of menstrual flow, defects in the outflow tract and hereditary factors. For instance, a woman with a first-degree relative having the disease has a risk approximately seven times the normal risk of developing the disease.

Symptoms
It is important to note that many women with endometriosis are asymptomatic. Nevertheless, endometriosis may be suspected in women with pelvic pain or infertility, especially if there is a positive family history.

Pelvic pain, often attributed to abnormal prostaglandin and cytokine production by endometrial and immune cells, is thought to be indicative of the depth of infiltration of the ectopic tissue. Pain can manifest itself as dysmenorrhea (painful menses), dyspareunia (painful intercourse) and lower back pain.

Symptoms can also arise from rectal, ureteral, or bladder involvement with endometriosis, and can be present through the month.

Diagnosis
A definitive diagnosis of endometriosis can be made by direct visualization of the pelvis and by histopathological examination of the excised tissue. Laparoscopy is the most important tool to diagnose endometriosis and to ascertain the extent of the disease. Today, Laparotomy is rarely indicated.

The characteristic appearance of endometriotic implants is powder-burn bluish lesions. Non-classical appearance of endometriosis including red flamed-like hemorrhage, brownish or whitish spots can also be found. As a result of the peritoneal –endometrial immune reaction, there are also characteristic changes surrounding the lesions which include the formation of adhesions and dilatation of peritoneal vessels.

Mechanical Interference - Impairment of egg and sperm transport due to peritubal adhesions.

Peritoneal Macrophage Phagocytosis - There may be increased activation of peritoneal macrophages in endometriosis causing phagocytosisof sperm, or secretion of cytokines which may be toxic to the embryo.

Luteinized Unruptured Follicle (LUF) Syndrome - Some investigators suggest that as many as 60% of women with endometriosis display this syndrome in which the follicle fails to rupture at ovulation, thus entrapping the ovum.

Surgical Treatment for Pain and Infertility

As hormonal therapy does not appear to eradicate endometriotic implants, it is believed that surgical intervention is the preferred way to manage the disease. In addition, laparoscopic surgery to remove endometrial implants is the method of choice in the treatment of endometriosis-associated infertility. Surgical intervention may include laparoscopic therapy, conservative surgery, semi-conservative surgery or radical surgery.

1. Electrosurgical Ablation - Small implants may be ablated by applying unipolar or bipolar electro-cautery to the lesion causing tissue necrosis. Unipolar cautery is best used for deeper lesions due to greater penetration, whereas bipolar cautery is generally safer because there is less thermal destruction of surrounding tissue.

2. Carbon Dioxide Laser Ablation - The advantage of this technique is that there is minimal damage to surrounding tissue as the energy used does not penetrate much beyond the surface of the implant.

3. Excision – Excision of the implants is our preferred method. It provides a more complete removal of the lesions than ablation. In the presence of endometriotic cyst (endometrioma), excision is also the best technique. It is associated with a lower rate of recurrence. 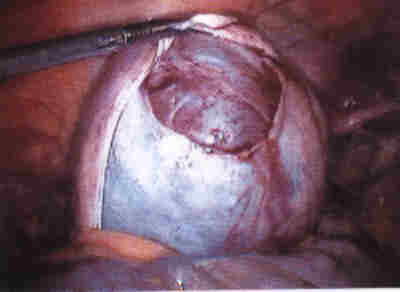 Excision of the cell wall of an endometrioma

The main goal of conservative surgery is to remove all visible endometriosis while trying to preserve or restore reproductive function. For recurring endometriosis after conservative surgery, where child-bearing is no longer an issue, the last resort and the definitive treatment is a hysterectomy with or without bilateral oophorectomy. Bilateral oophorectomy (removal of the ovaries) is advantageous as it decreases the risk of recurrent symptoms. However, the disadvantages of oophorectomy are the side effects such as severe menopausal symptoms, and an increased risk of cardiovascular disease and osteoporosis. 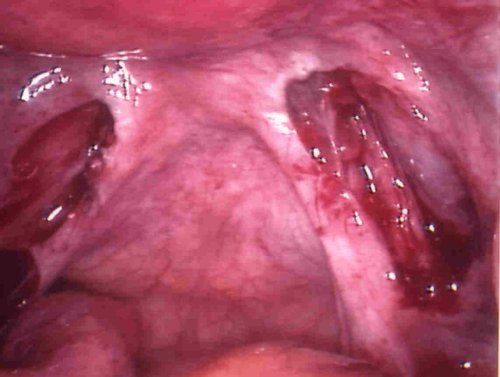 Endometriosis tends to recur unless a hysterectomy and bilateral oophorectomy is performed. The recurrence rate reported for endometriosis for all types of conservative surgery is 20% within 5 years. Complete ablation of endometriosis is claimed to be 90% effective in relieving symptoms of pain. Evidence suggests that excision of lesions is the method leading to the least amount of symptom reoccurrence.

In the case of infertility, the success of the surgery is related to the severity of the disease. Patients with mild endometriosis may expect a pregnancy success of approximately 60% compared to a 35% success for those with severe disease.

Note: All laparoscopic pictures reproduced with permission from "Atlas of Laparoscopic and Hysterectomy Techniques"