In 1935 Drs Stein and Leventhal described 7 women with irregular periods (oligomenorrhea), increased body hair (hirsutism) and obesity, who at the time of surgery were found to have enlarged ovaries with a smooth "pearly white" appearance.

In 1935 Drs Stein and Leventhal described 7 women with irregular periods (oligomenorrhea), increased body hair (hirsutism) and obesity, who at the time of surgery were found to have enlarged ovaries with a smooth "pearly white" appearance (See figure 1). The smooth appearance of the ovaries was presumed to be due to the lack of sites of ovulation that typically would leave scars. The ovaries were several times the normal size, which along with the elevated male hormone testosterone raised the possibility of ovarian tumors. Biopsies of these ovaries did not show tumors but instead revealed multiple, small "cysts" that were found to be immature follicles, and overgrowth of the part of the ovary that secretes testosterone (stromal theca cells). Surprisingly after the surgery, where up to 1/2 to 3/4 of each ovary had been removed for biopsy ("wedged"), the patients began having regular menstrual periods and 2 became pregnant. In addition, the testosterone levels declined in these patients. Bilateral ovarian wedge resection (BOWR) of the ovaries was then introduced as a procedure that could assist patients with polycystic ovary syndrome to ovulate. It was the only method available until the introduction of the oral medicine clomiphene citrate in the mid 1960's. The problems with BOWR were that it required a major abdominal incision and that almost all patients developed scar tissue (adhesions) around the tubes and ovaries that further exacerbated their infertility (Buttram, 1975).

Drs Stein and Leventhal had postulated that the outside of the ovary was too thick to allow eggs to release from the ovary, a concept we now know to be untrue. We now understand that high levels of testosterone and its derivatives within the ovary inhibit ovulation. The theory as to how wedge resection of the ovary works, is that it destroys enough of the testosterone producing part of the ovary to allow ovulation to occur. In the early 1980's several scientific reports of partial ovarian destruction by laparoscopic surgery began to appear as the modern version of BOWR. The laparoscopic approach uses several small (1/2 to 1 centimeter) incisions instead of a large abdominal incision, and avoids inpatient hospitalization. Several techniques have been described including: multiple small ("punch") biopsies of the ovarian surface (Sumioki, 1988), the use of a needle point electrode with electrical energy (Gjonnaess, 1984) or a laser beam (Daniell, 1989) to burn holes in the ovaries (drilling), or actually removing one ovary (Kaaijk, 1999). Others have described using a vaginal ultrasound to guide a needle through the vagina into the small follicles on the surface of the ovary and draining the fluid (Myo, 1991). The most popular of these techniques is ovarian drilling.

The technique of ovarian drilling is to destroy (cauterize) the testosterone producing tissue of the ovary. Usually the small follicles visible on the surface of the ovary are chosen as the spots to direct the electrical or laser energy, because presumably this is where hormone production is maximal. From 4-20 "holes" can be made in each ovary, usually 3 millimeters wide and 3 millimeters deep (see figure 2). Treatment of both ovaries is usually preformed, but reports that treatment of only one ovary can be successful have been published. Many physicians try to make the areas of cautery as far away from the fallopian tube as possible to try to limit the chance of tubal scarring. Others will wrap the ovaries with dissolvable materials that inhibit scar formation. Despite these efforts, adhesions around the tubes and ovaries can occur, but tend to be milder than with the classic BOWR, and do not appear to effect pregnancy rates (Naether, 1993; Greenblatt, 1993). Rarely the ovaries can undergo irreparable damage and cease to function (atrophy) (Dabirashrafi, 1989).

The success rates for laparoscopic ovarian drilling appear to be better for patients at or near their ideal body weight, as opposed to those with obesity. Over a dozen studies have been published with success rates for ovulation between 53% and 92% (Daniell, 1989; Gjonnaess, 1984). Success rates may be slightly higher with electrical energy (which tends to destroy more tissue), but the laser may lead to fewer adhesions. Patients with decreases in hormone production (testosterone and luteinizing hormone) are more likely to ovulate and achieve pregnancy than those without hormonal improvement. Patients not ovulating after the procedure have been found in many cases to become responsive to clomiphene citrate if they were previously resistant. Pregnancy rates have ranged from 37% to 86%. Overall these success rates are similar to the use of clomiphene citrate (80% chance of ovulation and 40% chance of pregnancy). Frequently, the surgical approach is chosen when a patient has already failed to ovulate on clomiphene citrate at maximal doses and has not responded to insulin sensitizing agents. The use of this procedure for other aspects of testosterone excess such as acne or hirstuism has yielded very poor results and is not recommended.

Laparoscopic ovarian drilling is not recommended as the first line of treatment for women with polycystic ovary syndrome who do not ovulate. Medical therapy is frequently successful utilizing either clomiphene citrate, insulin sensitizing agents or injectable fertility medications (gonadotropins); however, the use of gonadotropins is associated with at least a 20% risk of multiple births (mostly twins) and the possibility of high order multiple gestations (triplets and above). Many patients are unwilling to accept the high rate of multiple births associated with gonadotropins therapy. In addition, gonadotropins are expensive and often not covered by medical insurance. Laparoscopic ovarian drilling is considered an appropriate option for patients who have failed oral medications and are unwilling or unable to use gonadotropins, or those patients already undergoing laparoscopy for another indication. The benefits of the procedure are that ovulation usually produces only one egg per cycle, lowering the risk of multiple gestations, and in one study 80% of patients were still ovulating 10 years after the procedure. Another study suggested that this procedure lead to lower miscarriage rates (14%) as compared to gonadotropin ovulation induction (50%) (Abdel Gadir, 1992). The risks of the procedure include all the risks associated with laparoscopic surgery, as well as the potential for tubal adhesions and the very rare possibility of ovarian atrophy. As with any treatment, a complete discussion of the benefits, risks and alternatives with a physician who has comprehensively evaluated the patient's specific medical condition is mandatory. 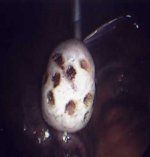 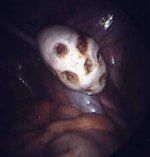