Ultrasound is widely used to locate and size uterine fibroids. According to the recent literature, 20% of women over the age of thirty-five develop uterine fibroids. Most women with fibroids do not develop problems and this abnormal uterine growth goes unnoticed.

Ultrasound is widely used to locate and size uterine fibroids. According to the recent literature, 20% of women over the age of thirty-five develop uterine fibroids. Most women with fibroids do not develop problems and this abnormal uterine growth goes unnoticed. However, there is a certain percentage of women with fibroids that experience excessive vaginal bleeding, pelvic pain, and cramping, repeated miscarriages, pelvic fullness, and frequency in urination.

Advances in technology have made it possible to treat women who have fibroids without the necessity to undergo hysterectomy or a myomectomy. This new approach that is gaining more popularity as an alternative is known as uterine fibroid embolization.

is required to view real-time video.

Fibroid embolization involves blocking the blood flow to a part of the uterus. This is done via a catheter that is placed into the femoral artery. Using fluoroscopy guidance, the catheter is guided through a series of vessels until it reaches the uterine artery. Once the catheter is in the uterine artery a slurry of inert micron- sized particles is injected into the artery that supplies blood to the fibroid. The blood carries the particles until they stick in the small arterial branches, blocking the blood flow to the fibroid permanently. In time the fibroid shrinks from the lack of blood flow. This technique involves fewer complications and risks associated with major surgeries and in most cases will reduce or stop the bleeding and pain those women with fibroids experience. This procedure is performed under local anesthesia and sedation. Unlike surgery, there is no scar, no chance of scar tissue development, and no risk from general anesthesia.

A forty-nine year old perimenopausal woman presented to her physician with excessive intermittent vaginal bleeding, pelvic pain, and sexual dysfunction. The patient was referred to our ultrasound department for further evaluation. A pelvic ultrasound consisting of both transabdominal and transvaginal scans was performed in an attempt to identify a cause for her symptoms.

On ultrasound exam, a 6.1 cm fibroid was noted. The patient initially elected to receive conservative treatment. However, in the months following this examination the patient's symptoms began to worsen and the patient elected to undergo uterine fibroid embolization.

The initial pelvic ultrasound showed a 6.1 cm posterior uterine myoma which was primarily transmural, but extended to the submucosal region. The myoma displaced the endometrial echo anteriorly, possibly contributing to this patient's symptoms. Images were taken both transabdominally and transvaginally.

A few months later this patient decided to undergo uterine fibroid embolization to shrink the fibroid. The patient was properly prepped in the angiographic lab and the catheterization and embolization process began. The following arteriograms were taken throughout this procedure. 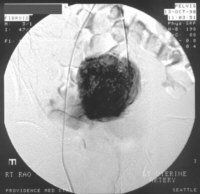 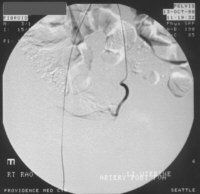 As demonstrated in Image 3b, post-embolization, blood flow to the fibroid is diminished because of the micron-sized particles that were injected into the left uterine artery.

After completion of the left side the process was repeated for the right side. Catheterization took place via the right internal iliac artery and the vessels were mapped out under fluoroscopy until the catheter had reached the right uterine artery. 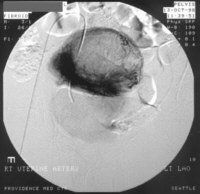 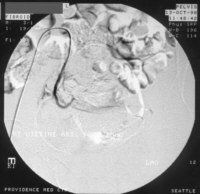 After successful completion of the fibroid embolization process the patient was given intravenous narcotics for the pelvic pain that she was experiencing. She was observed and monitored in same-day surgery for twenty-three hours after the procedure, and then was released from the hospital and returned home. The patient's symptoms resolved completely within one month.

Four months after the patient underwent uterine artery fibroid embolization she was again seen by our ultrasound department. At this visit it was noted that her clinical symptoms were much improved. A pelvic ultrasound was performed for follow-up evaluation of the fibroid. This ultrasound demonstrated a maximum diameter of 4.1 cm for the fibroid; this represented an approximate 33% decrease in the size of the fibroid compared to the previous pre-embolization ultrasound study. The overall uterine volume had also decreased.

On this ultrasound examination the fibroid was noted to be hypovascular, leading to the conclusion that the embolization process had been successful.

We believe that fibroid embolization will become a reasonable alternative for surgical treatment of women who suffer from uterine fibroids. This case demonstrates that the embolization process decreases the size of a fibroid and can relieve the symptoms that a patient may be experiencing. It will be interesting to see if this technique will be of benefit to more patients.

Special thanks to KOMO Channel 4, Seattle, for permission to use the videotape prepared for their newscast. To Providence Medical Center, Seattle, Washington and the staff of the Ultrasound Department and the Angiography suite. Also to Ann Polin and Joan P Baker of Bellevue Community College Diagnostic Ultrasound Program, where Brooke Harris is currently an intern, graduating in August 1999. Thanks to Dusty Bauer for review of this case study.