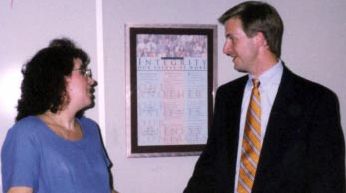 For years PCOSA member Lesa Childers knew she had PCOS. However, she felt increasingly frustrated by the lack of information available to her about the disorder and possible treatments.

In 1998 Childers met Stephen Sawin MD, a reproductive endocrinologist with the Center For Applied Reproductive Science in Asheville, N.C. Dr. Sawin was well versed on the latest research and treatments and assisted Childers in her battle with PCOS and one of its most devastating symptoms, infertility.

Like many of Dr. Sawin’s PCOS patients, Childers expressed concern about the physical and mental manifestations of the disorder. During one visit, Dr. Sawin asked Childers if she would consider facilitating a local support group for women dealing with the same frustrations. Childers quickly realized this excellent opportunity to share her feelings with others who had similar concerns could be very therapeutic for everyone involved. Thus, Western North Carolina (WNC) PCOSupport was formed and the movement towards raising local awareness about PCOS began.

The partnership between Childers and Dr. Sawin plus the support of the regional hospital and local media led to a very successful publicity campaign. Events have included guest appearances by Childers and Dr. Sawin on a local radio program, a detailed article in a regional newspaper about PCOS and Childers' experiences and a story in the internal newsletter of Mission St. Joseph's Hospital (MSJ) of Asheville. A local television station has also expressed interest in airing a piece on PCOS.

Also, a recent program about PCOS was given by Samuel S. Thatcher, MD and Dr. Sawin as part of the Community Lecture Series at the Helen Powers Women's Health Center at MSJ Hospital. There were approximately 60 participants and it was considered a resounding success. Childers spoke about the effects this disorder has had on her life.

Meanwhile, WNC PCOSupport continues to meet monthly and its influence has grown beyond all expectations. “The women of our group feel it is important to educate themselves and the community about this serious medical condition,” said Childers. “We have been very pleased with our recent success.”

For more information about the support group contact Childers at lesachild@aol.com or the Center For Applied Reproductive Science at (828) 285-8881.LESA CHILDERS works as a case manager with a local mental health agency in Whittier, N.C. She is the mother of two daughters: Tiffany, 10, adopted three years ago, and Hannah, born in Oct.

Chromosomal abnormalities in infertile couples who use assisted reproductive technology (ART) do not appear to impact cumulative clinical pregnancy or live-birth rates, according to a study published in the Annals of Medicine.

Women who underwent a frozen-thawed embryo transfer (FET) for assisted reproductive technology (ART) treatment were nearly twice as likely to experience bleeding or miscarriage in the first trimester with hormone replacement cycles (HRC-FET) compared to natural cycles (NC-FET), according to a retrospective cohort study published in the European Journal of Obstetrics & Gynecology and Reproductive Biology.

The authors noted that although adenomyosis is common among infertile women, it is unclear whether the condition has a detrimental effect on in vitro fertilization and embryo transfer (IVF-ET) results.

Women with previous recurrent ectopic pregnancy (EP) have a significantly lower risk of EP following in vitro fertilization (IVF), compared to women with previous single EP, according to a retrospective cohort study published in the journal PLOS One.